Finally, after a week or so of battling it out with the Google Cloud verification team Reflex is available on the Google Play store. The Android version is identical visually to the Windows version except you play by tapping the game board and dragging the screen around with your finger. The Android version also supports… [Read More]

Just a quick update. The Amazon Fire release is taking longer than expected to get through its review process. I will post again when it is available on the Amazon App Store. The Google Play version is now available but the achievements and other play service features aren’t currently working. I’m looking into the cause.

The time is almost here. The Android (Android 7+) and Amazon Fire (Fire OS 6+) versions of Reflex will hopefully be released tomorrow (2nd May 2022). For full details and links to the two stores please visit the Reflex page.

It’s been a couple of weeks since the big Steam release and everything seems to be going smoothly. There have been no bug reports so far, so I am continuing with developing the Android version. Google Play achievements and save games work somewhat differently from Steam and this has required a few alterations here and… [Read More]

It is with great pleasure that I can now announce that the Steam version of Reflex has left Early Access and is complete. This has been quite the passion project for me, and I am extremely happy with the final product. Hopefully, you guys will be too. The official release version had the following alterations… [Read More]

This week continues the final stages of development for Reflex. The focus this time has been on Achievements for the Steam and Google Play versions of the game. First up was to get an official build ready for submission to Google Play. Thankfully YoYoGames has a reasonably helpful document about setting up a game and… [Read More] 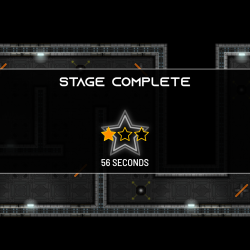 Another very busy week of development. This time focused on polishing the game and getting things ready for the full release. The objectives panel displayed in the game has been given a new lick of paint. The expanding box has been replaced with a much sleeker-looking design, and the level complete and fail displays have… [Read More]

It has been a very busy few days of development for Reflex. I have finished polishing the outro sequence and added in a short post-credits scene (it doesn’t hint at a sequel), and I’m entering the final stages of the game. Firstly, following on from last weekend all the tutorials have been recreated as animated… [Read More]

This week saw the release of a new version of GameMaker Studio 2 that changed a few things that affect Reflex. Firstly, the Steamworks integration has been removed from the core and replaced with an extension. In many ways, this is actually a good idea because it means that the compiled games that don’t need… [Read More]

World 5 level testing continues, albeit slowly. The levels are really quite complicated and that means it takes quite a few attempts at getting everything right. A lot of the time I sketch a level plan and on paper, it all looks absolutely fine. However, when you get to actually play it you realise that… [Read More]