Another week another new beta from YoYoGames. Unfortunately at the moment it seems to be getting worse for me. The latest beta build (.157) is now silently crashing Asylum under any run condition, be it through the debugger or normally. This is restricting my progress on the game for the time being and hopefully they… [Read More]

After the initial failings of the first GMS 2.3 beta with Asylum I decided to spend time this week sorting out the 3d model that is used for the player sprites. The original sprite was taken from a photo reference and then adjusted in Affinity Photo for my needs. The new one is easier to… [Read More]

Finally I’ve got my hands on GameMaker Studio 2.3 Beta. Unfortunately it has not gone very well. Some new commands in GML have clashed with variable names in the game. This isn’t too much of a trouble and I was able to locate them and alter accordingly. The mouse interactions that occur when the player… [Read More]

As I mentioned in the last dev diary I now have the feet, shoulders and head of the player character as separate elements that are animated in code instead of by spritesheets. This week I continued developing this to give the player a more fluid motion. When the player now looks around using the mouse… [Read More]

Development has been continuing during the lockdown from the coronavirus outbreak. Over the last week or so I’ve been updating a few of the sprites that didn’t look quite right. One of these is the janitor’s cart. Previously I had used a photo of the side of a cart taken from an image library. It… [Read More]

As the pandemic rolls on in the UK (and the world), and with myself stuck at home, I decided to press ahead with Asylum development instead of waiting for the no doubt delayed GMS 2.3 update. I’ll just have to work around the much needed features. Yesterday I went through the game as it stands… [Read More]

Just a quick update this week. As I go through what I currently have for Asylum I have realised that I’m at the point where I need the Sequences feature for GMS2. Fortunately it should be out before the end of Q1, so shouldn’t be much longer now. The downside is I can’t really progress… [Read More]

Wow, 100 development sessions. This week I have been playing through the first part of the game making sure things work correctly. Well, that was the idea. There were a few bugs to iron out. The triggers and blocked off areas were ignoring the fact the player had a torch after reloading a save point.… [Read More] 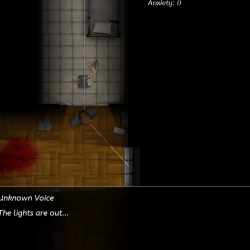 Starting the year off with a couple of easy changes. The first puzzle that the player comes across is a keypad door. Initially I simply had the code on the floor (scratched) near the door as a sort of ‘this is the sort of thing you’re going to need to do’ start to the game.… [Read More]